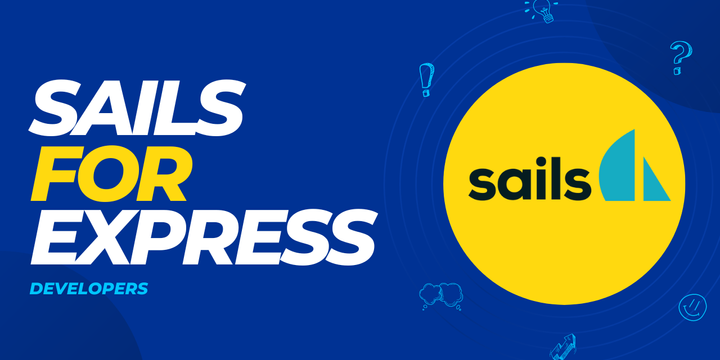 Let’s look at how routing is done in both Express and Sails. I’m going to start with Express.

Watch a screencast version of this article on YouTube.

First create a folder called express-app in a desired location by running the following command in your terminal:

Then move into the folder:

Let’s install express by running the following command in the terminal as well:

Once that’s done, create an index.js file in the root of the express-app folder and add the following code:

Here is the bit of code handling the routing:

From the above code, we can deduce the general form of routing in Express is as:

Where you can substitute METHOD for any of the HTTP methods in lowercase e.g, get, post, patch.

Then a path is provided. We are providing / in the above code because we want to handle request to the home route.

Now when you run the Express server by using the below command in your terminal:

This will start the Express server on port 3000 so you can visit http://localhost:3000 to see the response to that request.

First thing first let’s scaffold a new Sails project without a view to arrive at a similar state as the Express project above. To do this run:

If you are on a NPM version earlier than 8.x, you will need to first install the sails CLI globally by running the below command:

Then you can proceed to scaffold the Sails project:

For the rest of this article and other articles in this series, we will assume a 8.x version of NPM is installed on your machine and we’ll proceed to use npx.

Now open sails-app in your editor then open config/routes.js - which is the file you define routes in Sails.

Inside this file you wil find an empty exported object, your route definition goes in here. So modify that file so it looks like this:

You will notice unlike Express, in Sails routing is done with Plain Old JavaScript Objects (POJO) object, where the key is the path to path with the HTTP method in uppercase, and the value is the path to a standalone action in the api/controllers/ folder.

Now home/index don’t exists yet, let’s create it by running the below command in your terminal:

The above command will create a folder called home in api/controllers/ and then a standalone action file called index.js.

In Sails you read home/index as: the home controller with a standalone action called index

Now open up index.js and locate the fn method and modify it to look like this:

Note in Sails to respond with JSON to a request we just return a JavaScript object in the action.

When you start up the Sails server by running:

And you visit http://localhost:1337, you will see similar output like we saw in the Express example above.

Note that unlike Express where the route handler is passed inline, in Sails you have a file for every action which makes it maintainable for large projects or large actions(clearly you will be doing more in your actions than just returning JSON).

Sails routing also separates the route handling from the handler definition which makes for a great way to reason about your codebase as you know that your routes are in config/routes.js and your actions are in api/controllers/

That’s it for part 1 of Sails for Express developers. See you in part 2.